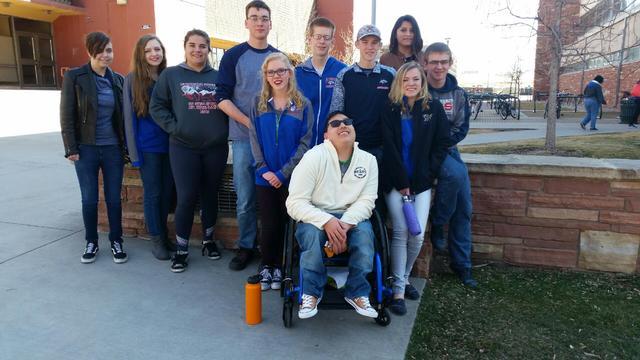 On February 5, 2018, the Akron Knowledge Bowl team traveled to Valley High School in Gilcrest, Colorado. Akron is in region 7, which is made up of 24 schools from the front range and northeastern Colorado.  It includes schools from 1A to 5A. A school from one classification can play against schools from any classification. The first round was the written round, which was a 60-question multiple-choice test. We got 39 of the 60 questions correct, placing Akron in seventh place out of twenty-four teams. With our score of 39, we began the first oral round against Windsor and Thompson Valley, two 4A teams. Oral rounds consist of 50 questions; the first team to buzz in with the correct answer gets a point. We scored 17 points and won the round. Throughout the four oral rounds, our team score fluctuated depending on how tough our opponents were, but we kept up with the teams we played against. Our team won the 2A regional championship and placed 6th overall with 89 points and we qualified for state. Holyoke, with 68 points, also qualified for state in 2A.

The state competition was held on the CSU campus in Fort Collins on March 12-13. The top 60 teams in the state competed. The first day consisted of one written round and five oral rounds. In the written round, we scored 43 points. We averaged 9.4 points in the five oral rounds and finished the day 5th among 2A schools. Our goal for state was to finish in the top 3 in the classification, which would qualify us for the class championship round, so we knew we had some catching up to do.

We scored 38 points in the second day’s written round and scored 16 points in the first of two oral rounds. For the final oral round, we were matched against two other 2A schools and all of us were vying for the last spot in the 2A top three. The three teams were all within 2 points of each other, making the final round the most important round yet. We were able to leapfrog one of the teams in the standings, but finished fourth, missing out on a spot in the top three and the class championship round by just 3 points. Luckily, the team is made up of juniors, sophomores, and freshmen, so we will all be able to compete again next year. Questions at the regional and state competitions covered everything from history, science, math, English, geography, literature, art, and current events.