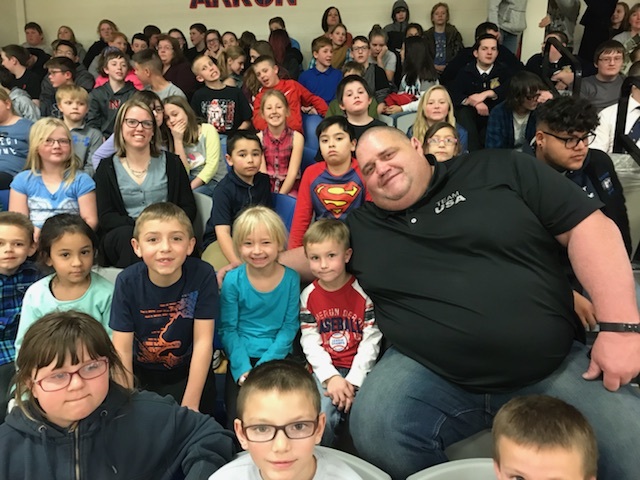 Rulon Gardner visited the Akron school and community on Monday, February 19th, with a message of hope and inspiration. Gardner is famous for upsetting Russian wrestling icon, Aleksandr Karelin, in Greco-Roman wrestling to become an Olympic Champion in 2000.  Gardner’s gold medal and his many accolades tell only a small part of his story.  In his presentation to students, he shared his experience growing up in the small town of Afton, Wyoming, where he learned the value of hard work on the family dairy.  He then spoke about progressing through school and overcoming a learning disability.   Rulon shared how people around him helped him to believe in himself at that time in his life.  With each additional step in his life he faced obstacles and doubters that helped fuel his determination to succeed.  After graduating from high school he attended junior college and worked to become a junior college national wrestling champion.  From there he went to the University of Nebraska, where he again faced some who doubted his ability to make it through the academic rigor and receive his college diploma.  Once again, Gardner proved those who doubted him wrong by not missing classes, spending time with tutors, and working hard every day to gain his degree.  From college he pursued his dream of making the Olympic wrestling team.  Once again the road was difficult for him as he was fairly new to the Greco-Roman wrestling style and many of the very good heavyweight wrestlers were much taller than him.  As he had done before, he trained and went to work pushing himself to get better until he was finally able to make the team.  After making the team and unseating the previous heavyweight Olympic qualifier, some people doubted him feeling that the U.S. was sending less than their best to the 2000 Olympic games.

After arriving in Sydney for the games, Rulon steadily advanced to the finals and a match up against Karelin the Russian.  His defeat of the Karelin made him one of the most famous U.S. wrestlers of all time.   Karelin had won the three previous Olympics, had not been scored on in 6 years, and was previously unbeaten for 13 years in international competition prior to being beat by Gardner.  Rulon followed up his gold medal with a world championship in 2001 and a bronze medal in the 2004 Olympics held in Athens, Greece.  He has several other achievements to his name which include: U.S. Champion 1995, 1997, & 2001, 2001 James E. Sullivan Award for amateur athlete of the year, 2001 Jesse Owens Award, 2001 U.S. Olympic Committee Sportsman of the Year, 2001 ESPY award for U.S. Male Olympic athlete of the year, and 2010 Induction as a Distinguished Member of the National Wrestling Hall of Fame.

Rulon’s story could have very well finished with the storybook ending of Olympic gold, but as was the ongoing theme in Rulon’s life, he would face more adversity.  Following the Olympics he won the world championship.  Things were going well for Gardner until 2002 when he went snowmobiling with friends in the mountains near his hometown.  Separated from the group, he ended up falling in a river.  Realizing he was stranded and in trouble, he built a shelter and held on for 18 hours before being rescued.  His body’s core temperature had dropped to life threatening levels and he had frostbite.  He had dodged death and was fortunate to lose just one toe from the experience.  By many accounts, he was lucky that he was able to keep his feet as doctors had to cut his boots off with a saw.  This experience left him with balance issues to overcome on the wrestling mat, which he did in making the 2004 Olympic team.  Rulon won the bronze in the 2004 Olympics and retired from wrestling.  Gardner faced another brush with death when he was involved in a plane crash into Lake Powell, Utah.  He and the guys he was with swam and treaded water for an hour before finally making it to shore, where they huddled together to keep warm on a cold February evening.

At the age of 46, Gardner has already lived an extraordinary life.  He now lives in Salt Lake City, Utah and stays busy selling insurance, coaching wrestling clinics, and conducting speaking engagements.  His primary message to people is that anything is possible if you’ll believe in yourself, work hard, and never give up.  The title of Rulon’s book is “Never Stop Pushing: My Life from a Wyoming Farm to the Olympic Medals Stand”.  While in Akron he was generous with his time.  He started with a luncheon that included the Akron school board and event sponsors at Five Star Restaurant.  He then spoke at a school assembly, visited with students in career and technical education, talked to the high school basketball teams, put on a wrestling clinic, and then finished the evening speaking to members of the community.  “His rural background and story of overcoming adversity made for a great connection with the students and adults in our community.  Rulon’s story and message is something everyone should hear.  We were excited to have him speak to us and grateful for the message he shared,” said Superintendent, Brian Christensen.  Rulon Gardner Event Sponsors include: Alan Baer Agency, Akron Wrestling Association, Bank of Colorado, Glosson Construction, TBK Bank, Luke & Kristin Crumley Family, and Layne & Samantha Crumley.